The Waterfowl Breeding Population and Habitat Survey (May Survey) is an aerial survey conducted in the U.S. and Canada and it provides annual breeding population estimates for most duck species in North America.

The May Survey also provides: 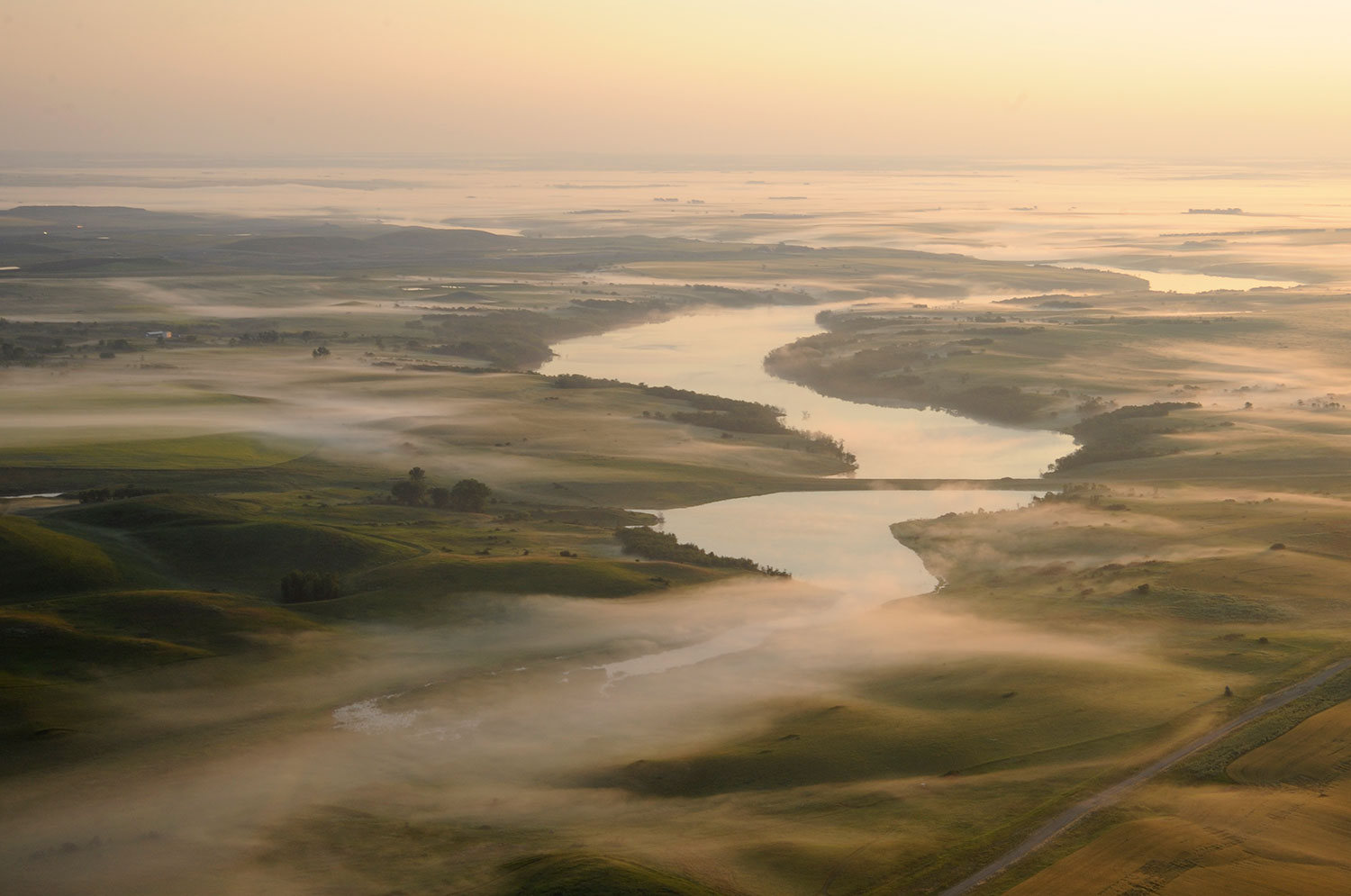 The May Survey became operational in 1955 and the area covered by this long-standing survey is commonly referred to as the "traditional" area, which covers 1.3 million square miles in Canada, Alaska, North Dakota, South Dakota, and Montana. The Eastern Survey Area became fully operational in 1996 and covers and additional 0.7 million sq. mi in eastern Canada.

Data collected along each established flight path or transect consists of:

These data allow the calculation of an annual index to the number of ducks for each species in the breeding population and are ultimately used by manager in the Central Flyway to monitor populations and determine hunting seasons.

More information regarding the May survey can be found by visiting the USFWS website.

Further information and results of the May Survey can be found in the Waterfowl Population Status Report.

The Mid-winter Survey (MWS) was first conducted in 1935 and is the oldest large-scale population survey of migratory birds that is conducted in North America. 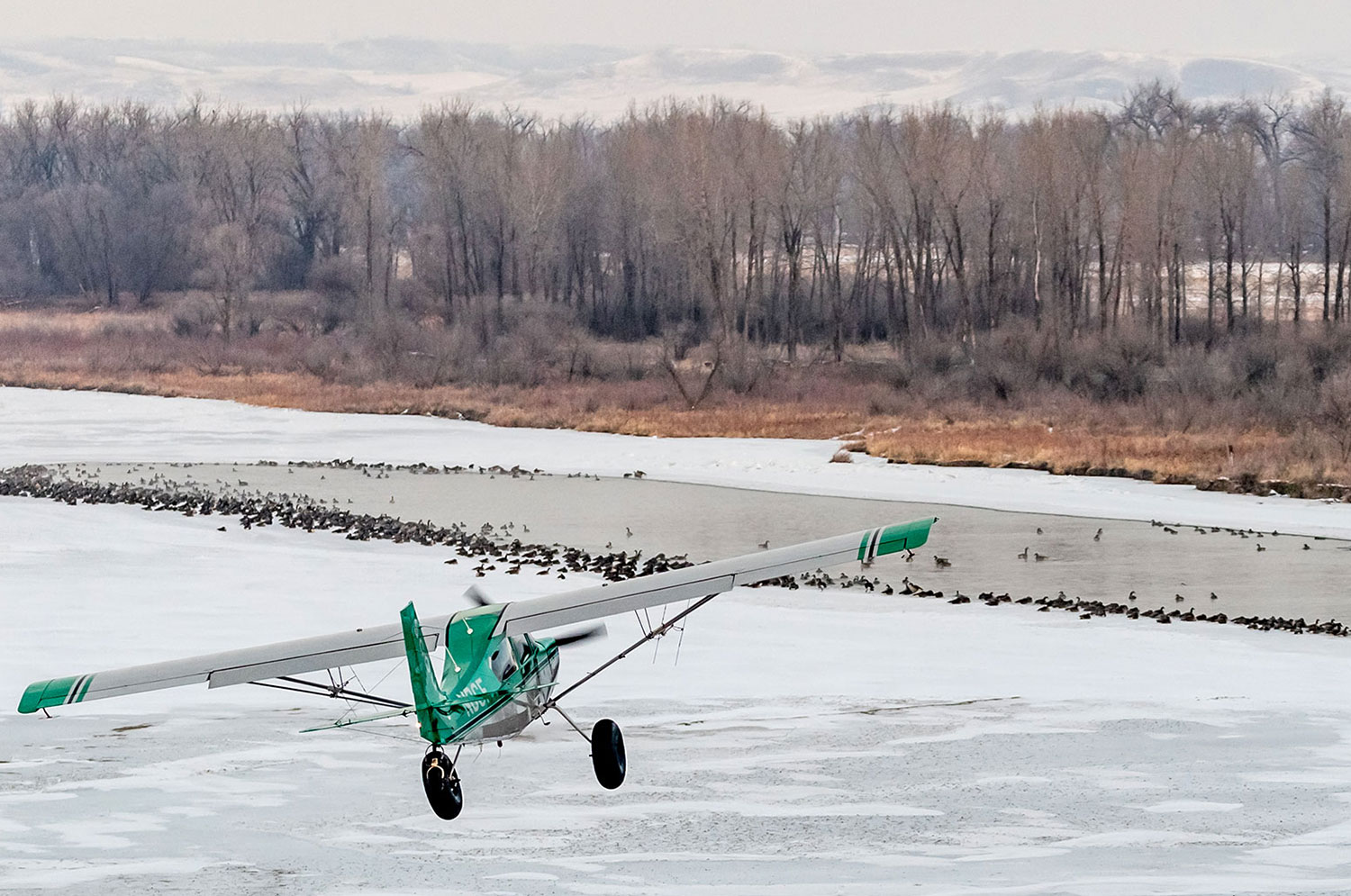 The MWS is perhaps most important for monitoring species that breed in arctic areas not covered by the Waterfowl Breeding Population and Habitat Survey. For these species, such as brant and tundra swans, the MWS is the only status information currently available during the entire annual cycle. As a result, actions included in the management plans for these arctic nesting species are driven by counts from the MWS.

Along with providing population information for some species, changes in wintering distributions have also been detected by the MWS, which helps mangers better understand the resources needed for wintering waterfowl in particular areas.

MWS survey data for all Flyways is available from the USFWS.

Many of these surveys are funded or conducted by the following agencies:

White-fronted geese are difficult to survey on their extensive arctic breeding range in northern Canada. Their winter range has also expanded over the past decade, particularly it has moved north into Kansas and Illinois, but thousands can still be found in traditional wintering areas of Texas and Louisiana. 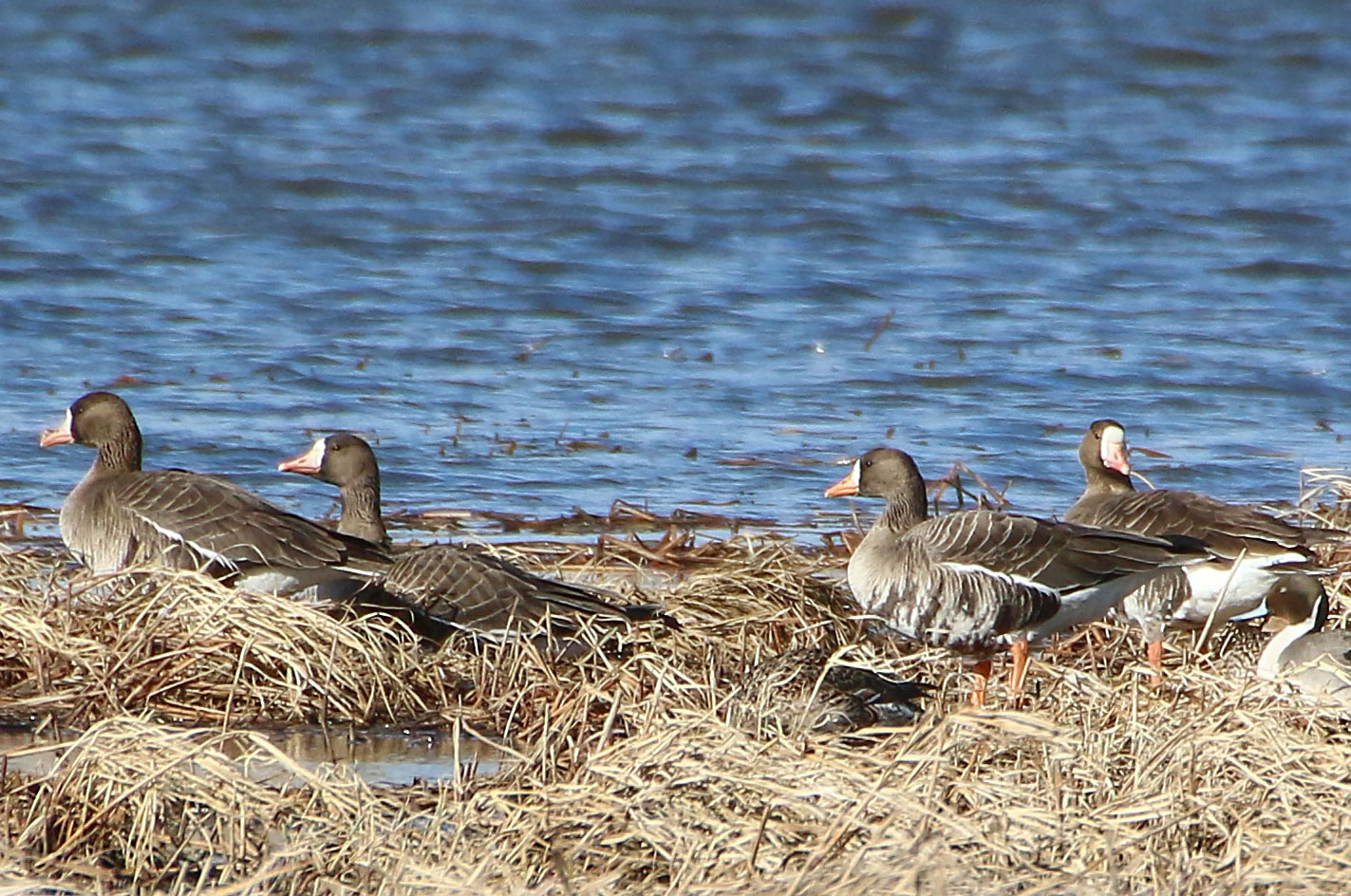 Justification for the survey:

The original survey for white-fronted geese was conducted from 1958 - 1995 during spring migration in the Rainwater Basin (RWB) of Nebraska. It was estimated that greater than 90% of the population was being counted in RWB during this time. However, by the early 1990’s, the spring survey in Nebraska became confounded by an enormous increase in the number of light geese (snow and Ross's) also staging in the RWB.

Formal experimental counts were conducted between 1992 and 1994 in south-western Saskatchewan and south-eastern Alberta, where most white-fronts staged in the fall. Since then an operational survey has been conducted in this area every year to produce an annual index to the population size.

Further information and results of the mid-continent white-fronted goose survey can be found in the Waterfowl Population Status Report. 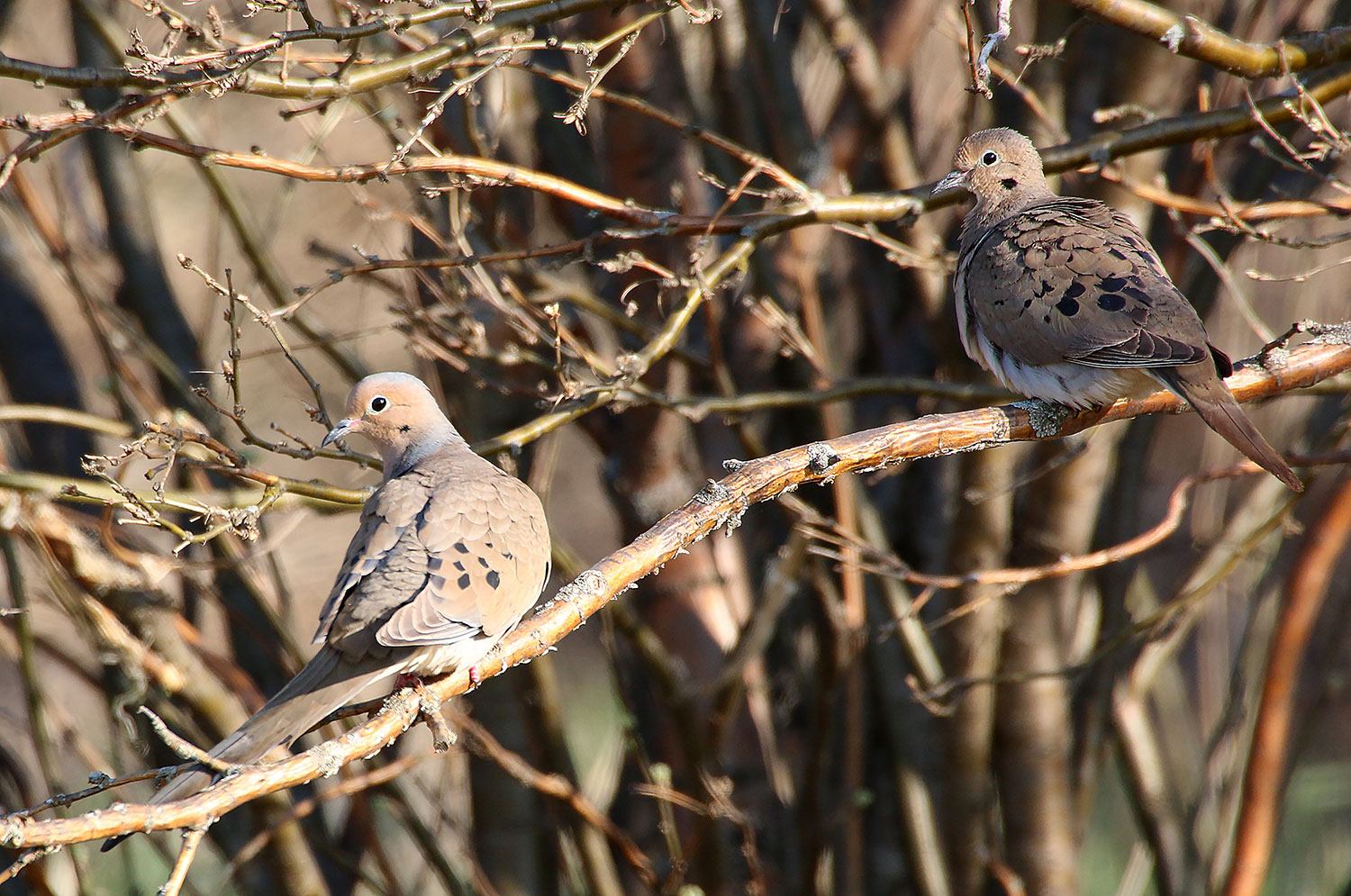 However, the CCS only provided an index to population size, but an estimate of absolute abundance could not be derived. As a result, the call-count survey was discontinued after 2013 and is no longer part of the harvest management strategy for mourning doves.

In 2005 the Mourning Dove National Strategic Harvest Management Plan called for the development of harvest management strategies that included decision criteria that explicitly state when regulatory changes will be made. As a result, a monitoring program was developed in which abundance estimates for mourning doves could be calculated.

There are three large management units; Eastern, Central, and Western, which were first described in the mid 1950’s as containing discrete populations of mourning doves (see map). The Central Management Unit (CMU) includes the 10 states of the Central Flyway plus four states in the Mississippi Flyway (Minnesota, Iowa, Missouri and Arkansas). The CMU has the highest population index of the three large Management Units.

More information regarding mourning dove surveys and population estimates can be found in the status report. 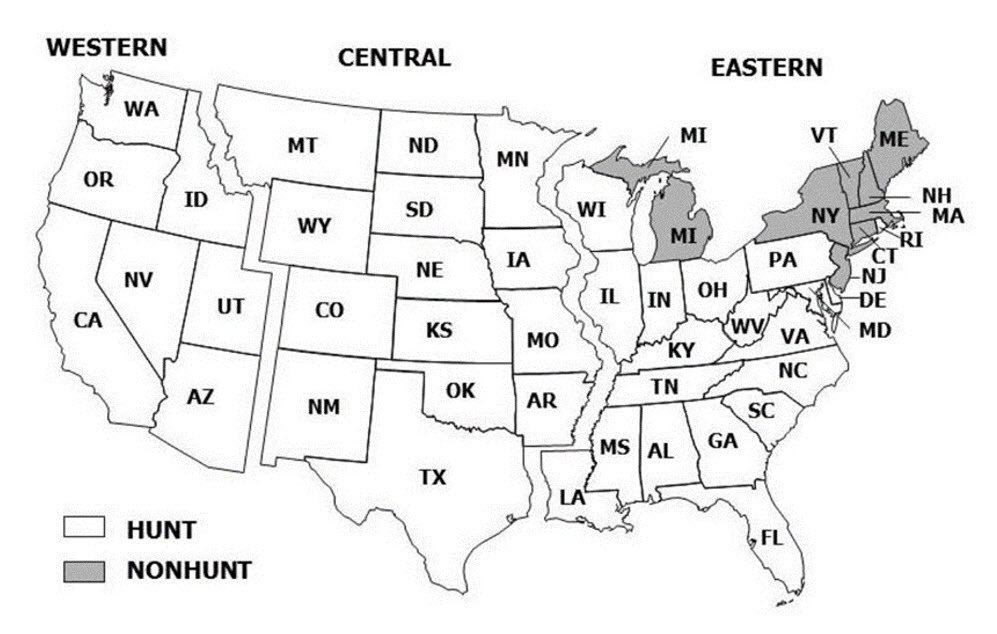 There are two populations of sandhill cranes that reside in the Central Flyway: the Mid-continent (MCP) and the Rocky Mountain (RMP) population. Surveys for these two populations occur in distinct areas and at different times of the year.

Historically surveyed during spring migration in the San Luis Valley (SLV) of Colorado. However, by the mid-1990’s a growing number of MCP lesser sandhill cranes were also using the SLV, confounding efforts to estimate the population size of RMP cranes. The spring survey was abandoned in 1997 and was replaced with a September pre-migration survey in the summer range states. 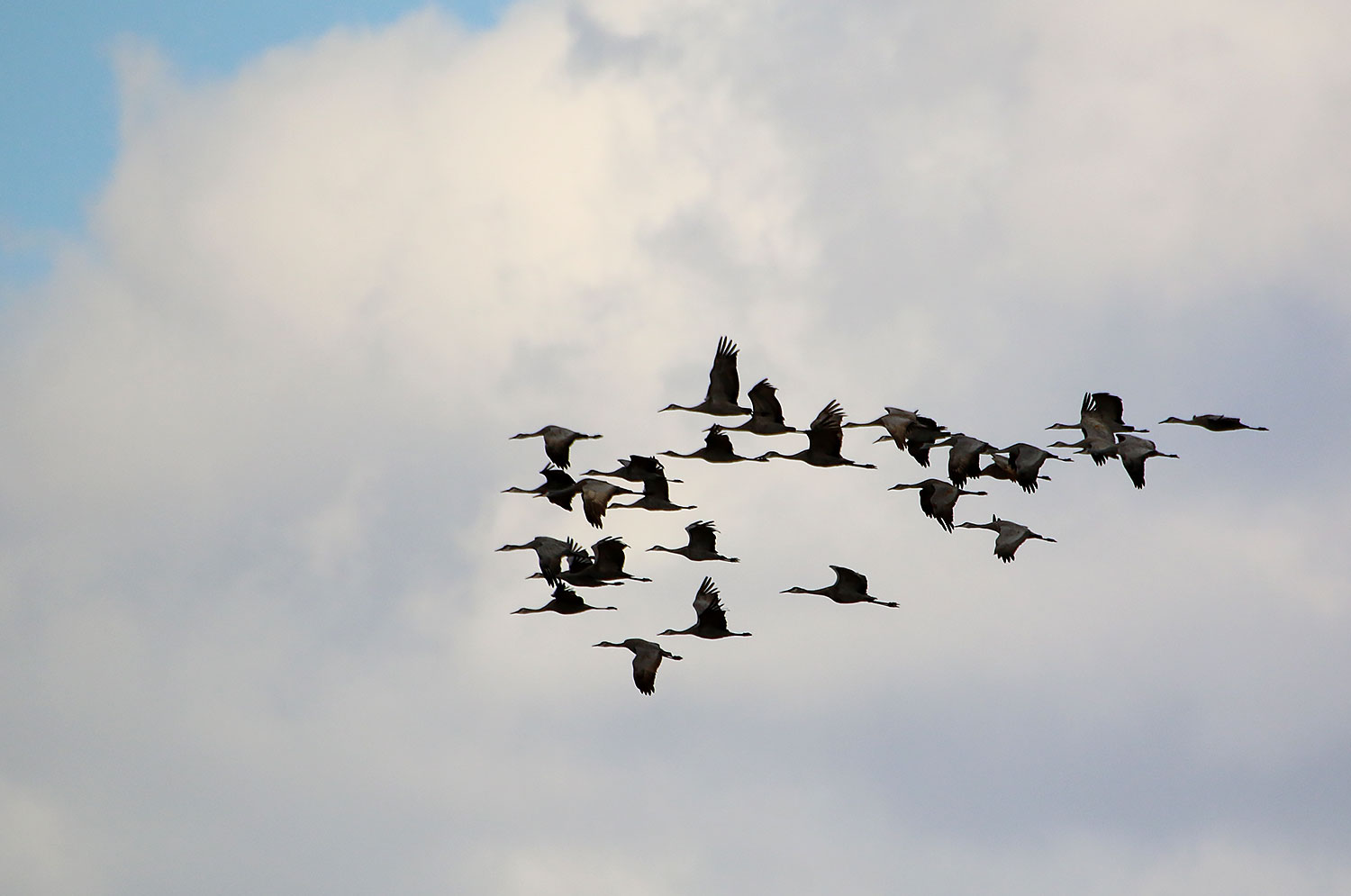 The sandhill cranes of the MCP are counted during spring migration when a majority gather along the Platte River Valley in Nebraska.

New techniques, such as using infra-red cameras to detect night time roosting cranes on the river are currently being tested to potentially improve estimates of the population size in the future.

More information regarding Central Flyway crane surveys and population estimates can be found in the status reports for sandhill cranes.

Sandhill crane harvest is estimated differently than for other migratory birds, which are derived from the Harvest Information Programs (HIP). All crane hunters need to have a special crane hunting permit issued by individual states. The database of crane hunters provides the sampling frame for the harvest survey conducted by the USFWS. In recent years, about 10,000 MCP crane hunters have been sent surveys regarding their harvest and hunting activity. The current harvest estimation system for sandhill cranes has been in place since 1975. 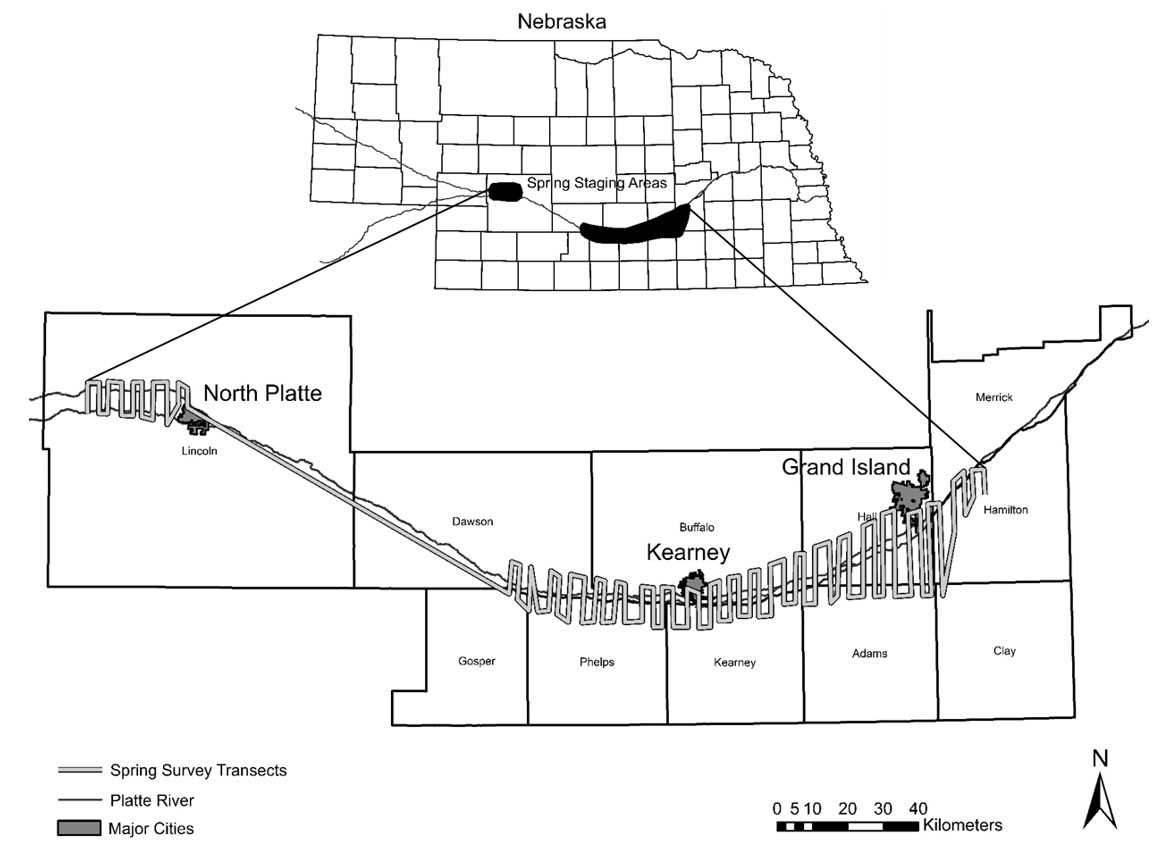 Figure. Spring staging areas and coinciding ocular transects used for the annual spring survey of the mid-continent population of sandhill cranes in the Platte River Valley of Nebraska.

There are hundreds of nongame birds in the Central Flyway and monitoring the population and trends of all these species is a monumental task. The North American Breeding Bird Survey (BBS) provides long-term population trend analyses for nongame species and their population status. The Christmas Bird Count (CBC) is another tool that provides information on trends for wintering birds. The BBS started in 1966 and the CBC began in 1900. More recently, an effort to identify density and occupancy estimates of bird species among geographic areas and across spatial scales was initiated by the Bird Conservancy of the Rockies through the Integrated Monitoring in Bird Conservation Regions (IMBCR) program. Individual state and provinces of the Central Flyway conduct independent nongame bird surveys and monitoring as well, but communicate and collaborate through the Nongame Migratory Bird Technical Committee. 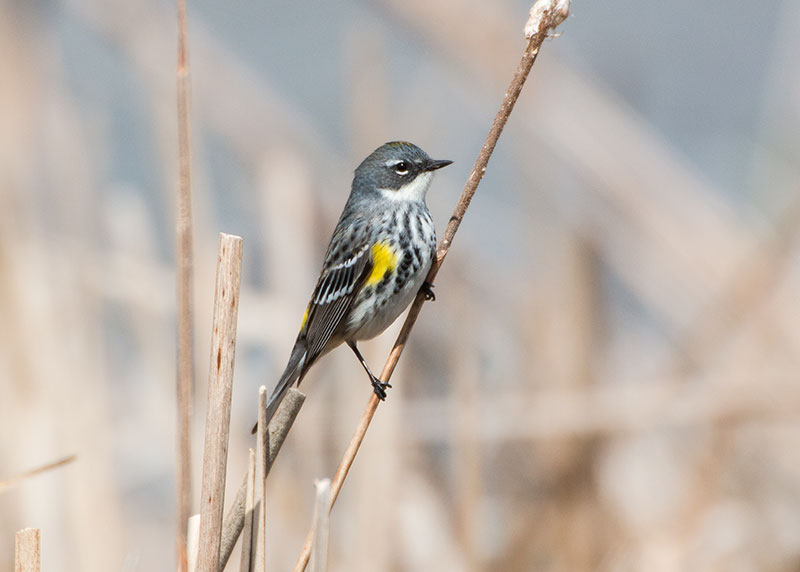